Bicycle Hymn of the Republicans

Bicycle Hymn of the Republicans 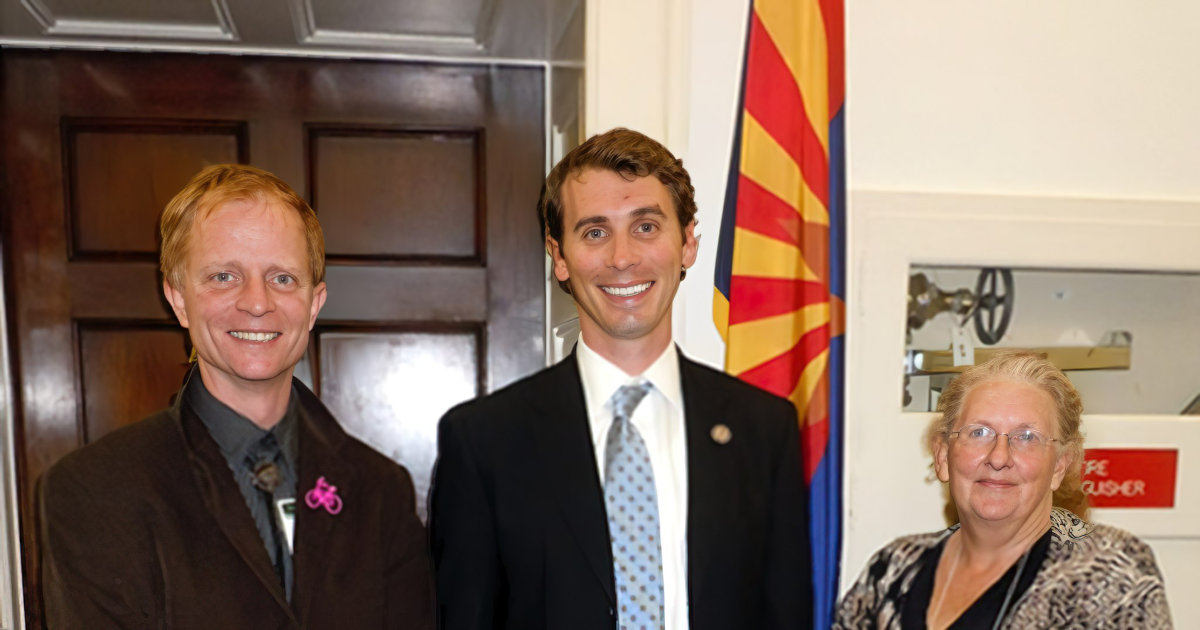 The post will be best appreciated with Battle Hymn of the Republic playing softly in the background.

I visited my elected representatives in Congress last week. I found the experience to be heartening. When we entered the first Congressional office building, I passed through a metal detector and my backpack was x-rayed.

But that was it. Once I got through security, I was free to roam the halls of the Capitol and its offices. Nobody asked me if I had an appointment–although Kristi and I did have appointments. I could have walked into the office of any Congressman or Senator and chatted up the staff for as long as they’d let me. I’ve encountered more security and scrutiny getting into convenience stores. I’ve encountered more obstinance ordering pizza.

The experience did great damage to my cynicism about government; made me feel that perhaps this country hasn’t yet gone completely bonkers. Sure, I’d have been taken more seriously had I been pushing a wheelbarrow full of money. But still.

Since posting my parts 1 and 2 of my experiences visiting my elected representatives, a few people have asked, once again, why cycling is perceived as a partisan issue.

Why did I assume that the Republicans would be tougher customers than Democrats?

Why are conservatives on bikes assumed to be liberals?

I’ve got my hunches.

Promoting cycling should be bi-partisan (or bike-partisan, as cycling wonks like to say), but it’s not – yet. The fact is, elected Democrats tend to support cycling more than elected Republicans.

Here are some bullets from BikePortland.org:

[T]here were 227 total co-sponsors of six different [pro-cycling] bills. Of those 227, all but nine are Democrats. There are only six Republicans members of Congress currently signed on as co-sponsors of all the major pending bike legislation in America. Here’s how it shakes out:

Now let’s take a look at the bi-partisan Congressional Bike Caucus. This is the mission of the caucus:

To provide Congressional leadership in complementing the efforts of the millions of cyclists actively working for safer roads, more bikeways, convenient bike parking and increased recognition of the importance of cycling for transportation and recreation.

Hardly controversial stuff. So why is it that Republicans make up 56% of the House of Representatives, but only 23% of the Bike Caucus?

At the risk of sounding naive (again), I think it’s partly because constituents have not made the conservative case for cycling, and partly because bike advocates have tended to stress the issues that appeal more to Democrats (health and environmental benefits), and that is where the traction and momentum has remained.

You know how newly-converted cyclists are always saying they didn’t know how much fun it would be until they finally got off their butts and tried it? Advocacy is the same way. I encourage you to try it, if you haven’t yet. The League of American Bicyclists has an Advocacy Center, that is a good place to start.

On Friday I participated in Congressional Bike Ride in Support of Rep. Gabrielle Giffords, D-Ariz. I spent most of that ride talking to Tom Bowden, author of our popular article “How to Talk About Cycling to a Conservative.”

After the ride, we pedaled over to Union Station and had a burritos. We talked about our experiences at the Bike Summit, and solved all the world’s problems. We concluded that cycling is one of those issues where people from different political perspectives can agree on the same solutions, but for different reasons. I want to save the environment. You want government to be more efficient. Kum-bike-ya.

13 thoughts on Bicycle Hymn of the Republicans

While I do agree that you do NOT have to be a “liberal” to ride a bicycle, and that “conservatives” do ride bicycles, there is a Big Elephant in the room. Pun intended. I work in the construction business and I work with a lot of “conservatives”. A very high percentage of these “conservatives” HATE bicyclists. The word HATE is used a lot when they talk about bicyclists and other perceived “liberal” groups. Radio talk-show commentators give these “conservatives” plenty of fuel for HATE. These are more good reasons to bicycle safely and legally.

Ted, thanks for your evenhanded and well-reasoned post. I think you are dead on that conservatives tend to be less enthusiastic about cycling because advocates have tended to be liberal…and thus have emphasized benefits that appeal to liberals.

What’s really funny to me is how liberals assume I agree with their politics because I commute 26 miles per day. They say things like “oh wow you are doing so much for the environment” so sometimes I’ll mention that my car is a hulking V8 sedan that gets at most 18 mpg…just to see how they react 🙂

I can’t disagree with Chrehn that some of the most anti-cycling motorists are construction workers and other manual laborers. I shudder at the sign of a pickup truck or van with a logo on the side. But I wouldn’t be too quick to assume all of these folks are registered GOP voters…

I’m in Scottsdale this week, which I would guess is a fairly conservative town. But the cycling infrastructure is stellar, and motorists have been nothing but nice to me so far (in sharp contrast to my home state of Massachusetts, which leans heavily liberal). So, let’s be careful with the generalizations…

(Ted, if I make it up the Flagstaff on this trip I’ll drop by the shop.)

I’m astounded by the results of the pro-cycling bills. I’d think that it would be a lot less lopsided nowadays with gasoline prices escalating and voters taking up utilitarian cycling.

This is why it’s important to keep in touch with local politics. Know your alderman!

Ted, after reading a separate post by Blues Cat, I remembered to thank you for your advocacy. Keep up the Good Work.

I think you are confusing being “pro-bike” with being “pro spend federal tax dollars on local bike projects” or “pro busy-body telling people that their cars are evil”. I’m to the right of Genghis Khan, so I don’t think that the Feds should be spending money on bike paths. That’s a job for state and local government. I also don’t think cars are evil. They are a useful tool. However, I also ride my bike to work nearly every day. So am I pro-bike? I’d say I’m pro-“let people make their own decisions”.

It’s a cultural issue, and very much a victim of the GOP reflexive mindset of “If the Democrats support it, we’ll oppose it.” (aka “whatever pisses liberals off” (see, e.g., Matt above). There is, as you’ve pointed out, a compelling conservative case for supporting cycling. But that doesn’t matter (see, e.g., Jamie, whom I’m pretty certain supports Federal highway spending). If Dems support it, that’s good enough reason to oppose it. It’s not a mystery.

I like the idea of being trans-partisan on transportation issues. The benefits of bicycling are beyond transportation equity though, as Democrats are usually first to point out.

I would be okay with federal money not going to bicycling if it wasn’t going to infrastructure projects that all but prevent bicycling. There needs to be parity because the costs of building more roads and discouraging cycling are too high, both in the short and longterm.

Everyone who lives within a few miles of their workplace should feel cycling is, at least, not a suicidal option.

My question is, how can conservatives not be for transportation cycling? The very base of conservatism is to conserve. That’s all a bike does – conserve.

The more people bike to work, the less damage to roads, the less use of gas to fuel cars, and the increase in health which could ease the drain on the healthcare system. Universal health care wouldn’t even be an issue if more people biked. We’d all be considerably healthier longer and not require so many triple bypasses paid for by Medicaid.

I consider myself a Libertarian and I am conservative on fiscal issues. I am Pro business and pretty capitalistic… I also ride a bike. Mainly for exercise as most of my commuting is via the airlines. I observe that most bicycle advocacy arguments are being framed by the liberal/progressive side of the political spectrum, often with no real consideration on how to sell such advocacy to whom they believe are simply not enlightened or just too stupid to be enlightened. Cycle advocacy has many real tangible arguments that should be made first before the less tangible arguments are put on the table like “cycling will save the Earth” or other non-sense. This over-selling of cycling along with the elitist attitude that is often served up is a huge turn-off to many of the folks you (we) need to pull to our side…

There are several reasons why cycling is closely correlated to partisanship.

1) Density. Cities tend Democratic/liberal, because density makes it clear that government can work (it has to, in cities), and diversity in daily life makes it harder to demonize “other” groups.

2) Environment. The conservative movement has changed from being indifferent to the environment to actively hostile — witness climate change denialism. So conservatives are extremely wary of any action which can be perceived as pro-environment.

3) Status. Cars are still status symbols in most parts of the country, and conservatives believe in status and hierarchy.

4) Power. Conservatives tend to seek out actions which increase their perceived power at the expense of others. Witness the conservative interest in guns, in controlling female sexuality, and in denying access to education and health care. Cars give one a lot of feeling of power, whether or not that’s actually true.

This isn’t something that’s going to change. The one exception to this — Salt Lake City — proves the rule. While SLC is of course strongly conservative, it is dense and is populated by a group which is culturally wary of open displays of status and power.

Of course we should keep doors open, but fundamentally, riding a bicycle for transportation is a liberal act. It creates health, is environmentally friendly, and is not a display of either status or wealth. The areas of cycling which are mostly white and restricted due to money or power, such as road racing, see a lot more conservatives participating.