Learning from a Humble Hopi Farmer

Learning from a Humble Hopi Farmer 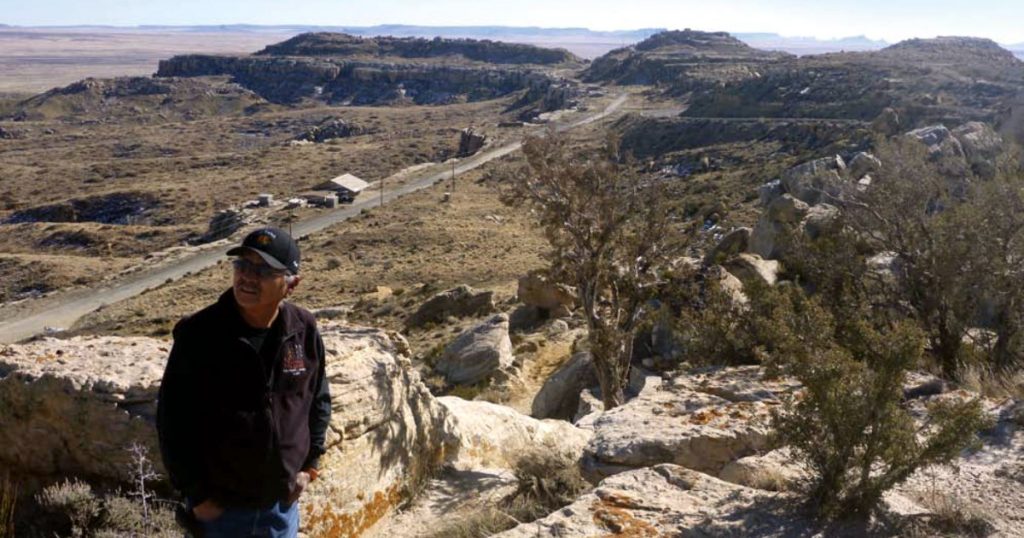 You might say I “produced” this piece. Tony brought to me the idea of doing a profile on Leonard Talaswaima, and his efforts to help Hopi farmers adapt to climate change using traditional farming methods. Tony and I went to the field together. I interviewed Leonard and took photos.

I know very little about agriculture, and I remember looking at Leonard’s arid fields and asking, “Why not build a dam?”

Leonard replied, “Water has its own intentions. You don’t want to stop it from going where it wants to go.”

I helped Tony to shape and structure this story, editing several revisions.

Colorado Plateau tribes have protected their natural resources and sustainably built their societies using a comprehensive body of traditional knowledge developed over thousands of years. This knowledge was vital for communities to prosper without using up local resources, and one key thread was strong agricultural practices that created many of the world’s rich foods and medicines. This body of knowledge is now threatened by climate change, which has brought unfamiliar weather patterns, decreased rainfall, drying of springs and watersheds, and increased temperatures.

Leonard Talaswaima, a traditional Hopi farmer, works to ensure the survival of the ancient dry farming techniques that have sustained his people in the high desert of northern Arizona since time immemorial. Leonard exudes an aura of seriousness, firm and accountable to his cultural responsibilities as a Hopi elder. He imparts traditional knowledge to his village’s most accomplished young farmers. His character and appearance are commanding but accessible, full of depth combined with humor and wit. He likes nothing better than sharing a wide repertoire of melodic songs that he composes for his people.

As an esteemed elder, Leonard works to ensure his tribe’s survival by guiding his village in restoring life-giving springs and helping to preserve ancient agricultural methods that have seen the people through hard times in the past. In recent years, he has become a natural leader of the Colorado Plateau Inter-Tribal Gatherings, where he has excited others about the need to preserve ancient tribal food and agricultural systems as a bulwark against climate change.

Leonard attributes much of his farming knowledge to his uncle who passed it down to him following Hopi protocols. He eagerly talks of how a “successful farmer” has to always be out in the field, becoming intimate with the land and weather over time. Traditional Hopi farmers monitored the weather in sophisticated ways to enable appropriate village preparations for the following year’s crop production. Over thousands of years, they created complex ceremonies to guide their relationships with the land and the rain—ceremonies that enshrined the importance of land stewardship and wise farming and ensured that traditional knowledge was passed from generation to generation.

Leonard emphasizes the importance of protecting the heirloom seeds that were cultivated especially to thrive on Hopi lands. These biological treasures are now under the double threat of climate change and introduction of genetically modified seeds. He is concerned that, “We are changing systems that no one should meddle with. Changing our foods and how we eat, and changing the very heart of the seed will create issues and consequences on our climate and health.”

We are changing systems that no one should meddle with. Changing our foods and how we eat, and changing the very heart of the seed will create issues and consequences on our climate and health.

Since 2009, the Grand Canyon Trust has facilitated a landmark series of Inter-Tribal Gatherings of cultural leaders from ten Colorado Plateau tribes. The assembled leaders have agreed that their highest priority issues are protection of sacred sites and water resources, restoration of community health, and preservation of languages and cultures.

With Leonard’s guidance, the Gatherings recently spawned a Traditional Farmers Group that has brought those lofty ideals down to earth in a set of collaborative projects. Participants are mentoring local farmers and gardeners in all aspects of successfully raising crops with scarce water supplies. Farmers markets are being established that include teaching traditional food preparation, all with an eye to building the resiliency of local food systems. The culmination of this local work will be the creation of an inter-tribal coalition dedicated to educating communities across the Plateau about food and farming issues and strategies to preserve their heirloom seeds.

For Leonard, an important benefit from this process is the reestablishment of old traditions of tribes coming together to share stories and solutions. He recalls elder tales of a vital trading hub with the Supai People in the Grand Canyon, where many tribes made pilgrimages to trade prized items like buckskins, minerals, shells, salt, and peaches. The trade in material objects was greatly enriched by sharing wisdom about ethics, stewardship of lands, and cultural and religious practices. The best of traditional knowledge was spread and adapted to local circumstances.

Leonard’s vision for the future is that tribes once again achieve sustainability. “In Hopi history, we know of a time when we had no mechanized transportation and we settled in a place with not much available. Yet we sustained ourselves in our villages.” In a time of great uncertainty, this vision of a people rooted sustainably in their place seems like a model for all society, and one the Hopi can aspire to more realistically than most.