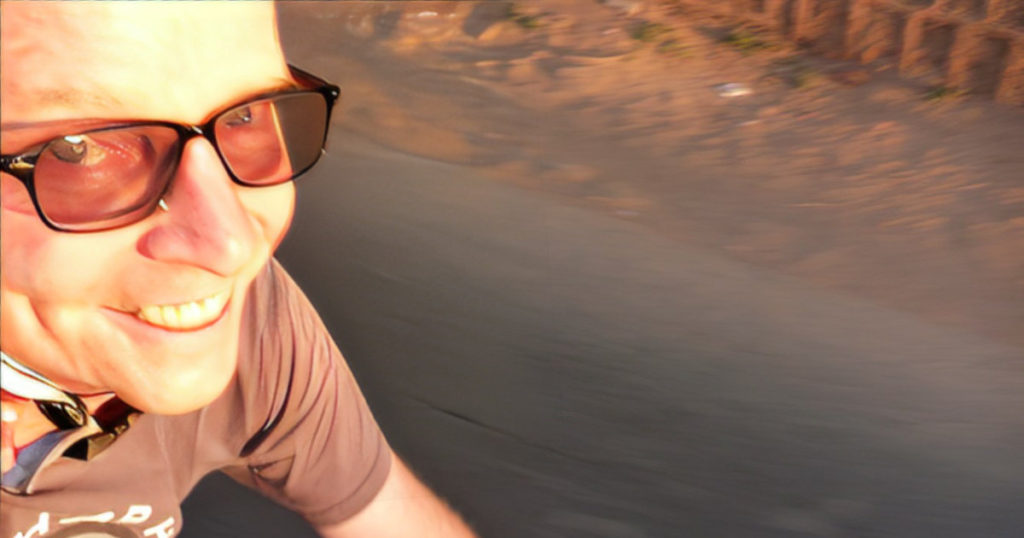 After a week in Madagascar, I finally got a bike! I rode home to my apartment, taking selfies all the way.

That week without a bike served me well. I spent some time on foot, in taxis, taking small public transportation buses (taxi brousse), and bumming rides from various colleagues with their SUVs. I observed how motorists interacted with people on bicycles and with pedestrians.

The traffic appeared anarchic at first – intimidating even. There does not seem to be any clear sense of right-of-way at intersections and roundabouts. I don’t know if there’s a traffic light anywhere in this entire city. I have noticed one sad, impotent, stop sign on a main road. I’m possibly the only person who has ever noticed it.

But anarchic and chaotic are not the same thing. (I have a BA in Political Science, and I wanted to let you know.)

Eventually I noticed something kind of wonderful: Motorists here seem to expect to be interacting with bicyclist, and they do so ungrudgingly. They… they… share the road!

In America, many motorists lose their minds when they notice a bicyclist on the road – as though they just found a condom in their hamburger.

My first several rides in Madagascar traffic, I pulled some maneuvers that – although safe, legal, and civil – would have invited anger from motorists on the streets of many American cities. A honk, a shout, a finger: bikelash.

When I get honked at here, it’s a courteous notification from the driver that his vehicle is approaching, passing, or trying to pass. I was even honked at by a guy on a bike the other day (because I had rolled right in front of him and then stopped like a thoughtless jackass).

Yesterday a driver said something to me in French as I passed him on a one-way street. I think he said, “Why the hell are you salmoning with that blinding bike headlight in my face.” Lots of people salmon on that street – even scooters – but I know, I know: That doesn’t make it right. I won’t do it again.

So I’m still feeling my way through this. But I have to say that I feel paradoxically safer on the streets of Antananarivo than I would in most American cities. This, in spite of the fact that I cozy up to motor vehicles in motion more often and more closely than I would in Flagstaff, Tucson, or Washington DC.

I watched this gray-haired guy splice through a congested street with mild-mannered confidence – and with barely an inch or two of clearance. He showed no bike-messenger brashness. Just smooth, steady, and slow. I’m sure he startled or annoyed absolutely no one. I thought, That’s how I want to do it.

I followed him for several blocks, but eventually his Zen flow through the living maze of traffic was just too good. He receded ahead and disappeared from sight.

I haven’t seen a single bike cargo trailer, although I’ve been told they are common in other parts of this country. But this rickshaw-type of transport is everywhere, right among the cars, trucks, buses, and bikes. Sometimes it’s cargo, sometimes it’s passenger, often it’s both.

And the cars, trucks, buses, and bikes flow around these guys and their carts as though they were legitimate users of the roads – because they are.

Don’t get me wrong. Antananarivo is not a bike-friendly city in the way that Copenhagen and Amsterdam are, or even in the way that Boulder and Portland are. This city clearly drank the car Kool-Aid as much as any other African metropolis I’ve visited. I haven’t seen anything resembling a bike lane or a sharrow. Well, I did find this sweet stretch of car-freedom, but it’s not practical for my commute:

Furthermore: Don’t get the idea that I am complacent; that my guard is down. I am using two bike headlights and two tail lights even during the day. As in American cities, I ride with my favorite helmet-mounted mirror. (More on my gear in a future post.)But the culture here seems to be accept human-powered modes of transportation as normal. John Forester’s dream of integrated cycling is alive and well in Antananarivo – clearly without the input of any transportation planner.

So in the spirit of Amsterdamize and Copenhagenize (sort of) I bring you Tananarivize – “Tananarive” being the nickname for Antananarivo.

But don’t be expecting any Cycle Chic. I haven’t seen any pedaling Fashionistas here, and don’t count on me to start that trend.

Here on Commute by Bike, I intend to explore the surprises and lessons of bicycling in this fantastic city.

Like a good Commuting 101 student, I used Google Maps to find the perfect route. I noticed this sweet canal path that ran parallel to the main busy road I took to work – if I could only find the bridge over the canal.

Based on my experience living in Phoenix, with its pleasant canal paths; Tucson, with its Rillito River Loop; and Washington DC with it’s paved parkways, I predicted that this was going to be my route of choice. I expected peace and solitude, with an occasional, Howdy! On your left!

I was right that this path would be car-free, but…

Roughly translated, “Howdy! On your left!” is Azafady in Malagasy, the language of Madagascar. I ended up saying that a lot.So, although this alternate route did get me away from cars, it ended up taking a lot more time. There where other bicyclists on this path, and even a scooter. But I kind of felt like I was riding on a sidewalk – in a bad way. (And, beginners, riding on the sidewalk is almost always bad.)

With low-speed maneuvers around kids, dogs, and chickens – and my trying not to annoy anyone – I felt like a trials rider. Riding on this path was more challenging than riding on the busy street.

It was kind of a relief when I got back onto the main roads. Imagine that.

I may take this route again when I have time to spare. I saw some small restaurants I might want to try. But I think I’ll mostly use the main drag.

What is most surprising and refreshing is that I feel safer here when mingling with motor vehicles than in any American city where I’ve ridden a bike. If there were a protected path or quiet country road to work, I’d take it. But I work near the heart of downtown. There’s no way there except to plunge into it. It’s a pretty short commute – less than three miles if I take the most direct way.

The final stretch to my office goes downhill, and somehow it reminds me of coming into downtown Denver.

This is a block from my workplace:

Before coming to Antananarivo, I was committed to try bike commuting once I got here – in spite of the wild reputation I had heard about the traffic from a number of people. But I wasn’t going to be stubborn. I was prepared to forgo bike commuting if the route to work seemed too risky. Happily, that’s not going to happen.

yeah ted. Love your bike adventures. Remember to be even more careful than when you bike commuted in DC or Phoenix. Don’t want to hear about the local emergency rooms.

I think the main problem with riding bikes on the road in America is that the majority grew up in a car-centric culture. In other countries such as the emerging Third World where bicycles on the street are more common there is better tolerance. There are rules/laws though to keep them out of main thoroughfares where they pose as a hazard to fast moving vehicles. (Who in their right mind would use a bicycle on a highway anyway?)