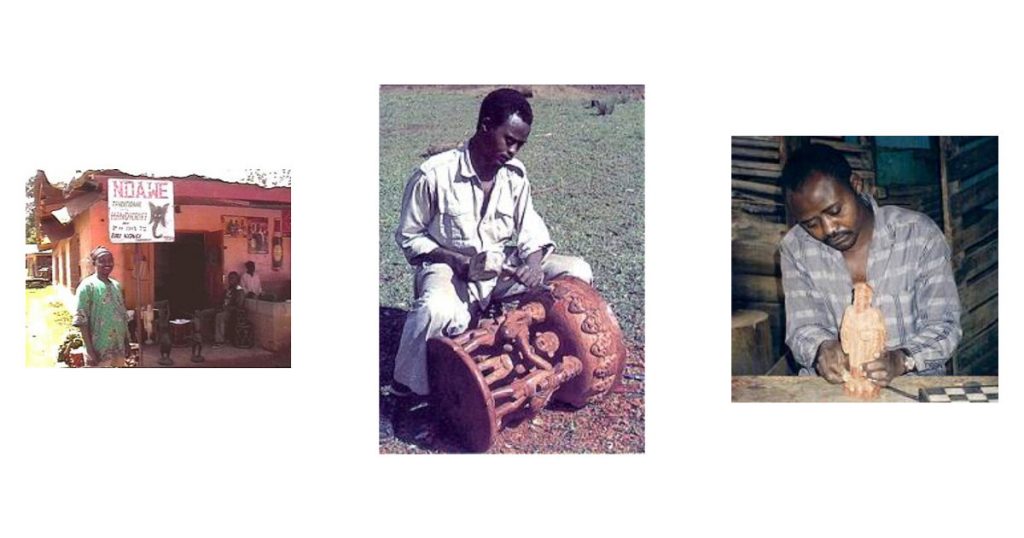 Roughly translated, Ndawe means “House of Art.” Formerly the master carver for Prescraft, Cameroon’s most well-known exporter of Fair Trade crafts, Edwin Fotachwi now has his own apprentices and a roadside showroom in his home town of Bali-Nyonga, Cameroon

As a young carver for Prescraft, Edwin took on the challenge of replicating a complicated African ceremonial bowl supported by two rows of statues. He had only a photograph to work from. Many of his fellow carvers had tried and failed. Some of them said that it would be impossible to carve the bowl. Edwin took the time to study the photograph and plan his work carefully. When he succeeded he soon became the most prominent carver among the many carvers in Bali-Nyonga.

In 1993, Edwin decided to leave the relative security of Prescraft to start his own carving studio and showroom. With the assistance and encouragement of two Peace Corps Volunteers*, he learned the basics of bookkeeping and marketing. Then he made the unprecedented step of choosing a young woman, Babila Veronica Ndungmbowo, as his first apprentice. Veronica now has her own workshop and apprentices.

Edwin’s talents as a sculptor have earned him many admirers, including the Fon (King) of Bali-Nyonga. However, the local market for his sculptures, traditional stools and drums is not reliable.

When PEOPLink visited Edwin in late 1999, he immediately grasped the potential of the Internet to help him reach new customers. Although he does not own or use a computer, he was able to accurately describe the Internet – while speaking Cameroonian Pidgin English – to fellow carver Nchinda Wanjel Frances.

To make ends meet, he must often “mass produce” smaller objects such as letter openers and bottle openers. Beautiful products, but not very challenging for the talents of a master carver. If Edwin can reach new customers on the Internet, he may be able to stay focussed on his art.

* One of those PCVs was me.