The Mayan Apocalypse and Cycling Irrationality

The Mayan Apocalypse and Cycling Irrationality 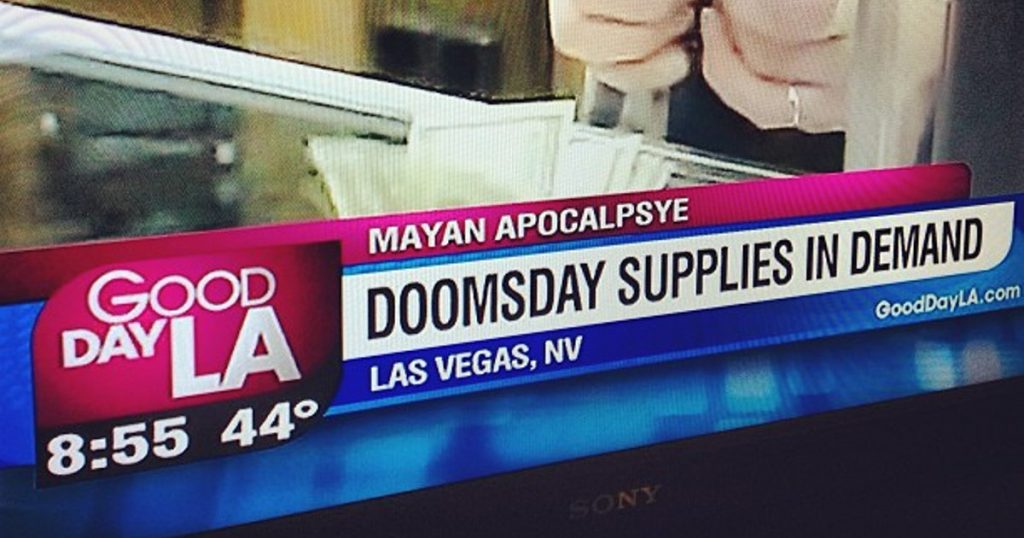 Today is December 21, 2012. The Mayan Apocalypse has not happened. But it’s early in the day as I write this, and there’s still plenty of time for solar storms, a geomagnetic reversal, a surprise collision by a Ninja planet, or whatever.

I’m not counting on it.

My attitude is akin to Brent Cohrs, who wrote yesterday on his pop-up-ad-infested blog:

If I truly believed that the world would end tomorrow, that this was it – I wouldn’t waste a second on the Internet. I would be out riding my bike!

Although there is something to be said — a lot, actually — for living each day as though it were your last. (I seriously spend way too much time on the Internet and not enough on my bike.)

But I never — not for a second — considered that this Mayan Calendar nonsense might be true.

If the sky were to suddenly darken today, I’d be tempted to ride up Mars Hill to the Lowell Observatory (after grabbing a new top-of-the line bike headlight off the shelf where I work — because the sky is dark), and I’d ask those astronomers up there, What the hell!?

Perhaps I’d be able put it in the form of an empirical question, but that would be the gist of it.

Yes, if the sky were to darken, and the end of the world were undeniably upon us, I’m afraid my last few hours would be spent contemplating all of the other non-scientific claims I’ve rejected as utter nonsense. Might they be true as well?

The list is long, so here I’ll just stick to some of the irrational claims made about bike commuting, and to bike commuters.

Airhead Cool Spray and the First  Law of  Thermodynamics

Months ago, I received some samples of Airhead Cool Spray, which contradicts the first law of thermodynamics with its claim that it “acts like air-conditioning for your helmet” and “maximises ventilation from helmet vents.”

I sent the sample to Karen Voyer-Caravona, who tried it out in the heat of a summer in Phoenix. Karen may be a sucker for fashion — that enormous cesspool of irrationality, chicanery, and wish fulfillment — but she couldn’t deceive herself about the efficacy of Airhead. The lacking efficacy, that is.

It gave her a short-lived tingly menthol sensation. That’s all.

Karen couldn’t bring herself to write a review for this spray-on elixir.

Do you, Bike Commuter, wonder whether you are doing enough to reduce pollution? Of course you do.

You probably also wonder what you can do about the weather, earthquakes, and declining bee populations.

A bicycle-mounted Purviance Pyramid alleviates all of these and more — according to the inventor, Ross Purviance.

Ross has one of these pyramids mounted to his Xtracycle, and he claim’s credit for the absence of chemtrails in Los Angeles.

(If you didn’t already know, Chemtrails, say conspiracist, are a special kind of aircraft contrail dispersed in the sky by the government to weed out the sick and the elderly, or to manipulate the climate — to name just two of the theories.)

It would be unfair to call Ross a Charlatan, because he really seems to believe this stuff. On the other hand, his Web site reads like the rantings of a street-corner lunatic.

But, if it helps popularize cargo bikes, can it be such a bad thing? (Remember, I’m the guy who is okay with leveraging our culture’s pathological obsession with celebrity to help get people on bikes.)

The Majority of Bike Commuters are Maniacs

People form opinions based on emotion, not on logical analysis, because… it’s easier.

In this article from Slate Magazine, Jim Saska confesses to contributing to the negative perception of cyclists as he explains the irrational psychology of the broad-brush judgements made by many motorists.

People do this all the time, making false connections between distinguishing characteristics like geography, race, and religion and people’s qualities as human beings. Sometimes it is benign (“Mormons are really polite”), sometimes less so (“Republicans hate poor people”). But in this case, it’s a one-way street: Though most  Americans don’t ride bikes, bikers are less likely to stereotype drivers because most of us also drive. The “otherness” of cyclists makes them stand out, and that helps drivers cement their negative conclusions. This is also why sentiments like “taxi drivers are awful” and “Jersey drivers are terrible” are common, but you don’t often hear someone say “all drivers suck.” People don’t like lumping themselves into whatever group they are making negative conclusions about, so we subconsciously seek out a distinguishing characteristic first.

Accommodating Cyclists is Bad for Business

Anywhere in America, talk about taking away parking to create a bike lane, and the local businesses freak out. They are afraid of losing customers because, of course, they believe everybody arrives by car. This notion has been refuted by multiple studies — including the Wall Street Journal, where Ted Mann recently (and grudgingly) wrote:

In a new report released Wednesday, the city Department of Transportation analyzed the retail activity around some of the first of its major street projects, like the protected bike lanes on 8th and 9th Avenues…

The result, the DOT contends, has been a boom in retail activity, seemingly linked to the way its experts have tried to improve the city streets.

But nowhere has this irrationality been better expressed than on Bikeyface:

So, assuming we survive this Mayan thing, can we shed our irrationality around cycling? If not, can I sell you some Airhead Cool Spray?

What about you? Can you think of other examples of irrationality with regard to cycling? Leave examples in the comments. (But not, for God’s sake, anything about helmets. We know how you all feel about that.)

« Life After Messenger vs. ‘Career Courier’ Complete Streets: How Including Everyone Can Make Communities Safe, Fun, and Prosperous »

3 thoughts on The Mayan Apocalypse and Cycling Irrationality

A review of Airhead Cool Spray by Karen:

I tried it. It didn’t work. Why did I bother even hoping?

The biggest, non-helmet cycling irrationality I can think of is the line — promoted by all of the non-cycling “experts” — that “Bicyclists need to follow ALL the same rules of the road that motorists are required to follow!”

There are so many departures from logic and reasoning inherent in that “irrationale” that I hardly know where to begin, but let me start it and everybody can chime in when they think of their own examples.

The “posted speed limit” is supposedly the MAXIMUM speed you go in your vehicle, but the vast majority of motorists view it as some sort of hazy goal for rush hour traffic and a silly impediment to their progress at all other times … and if you dare to be on a bicycle in the lane in front of them and ARE NOT proceeding at that speed, you are a justifiable target for road rage!